By joining IMUK you are supporting vital work to ensure that independent midwifery remains as an option for future generations of midwives and women. Find out more about membership benefits by clicking the link below.

A Worldwide Journey for Mother and Midwife – Day 1

It is not one but two flights I was about to embark on, and although I usually love travelling, on this occasion I wasn’t looking forward to the long journey ahead. The journey and adventure I was about to go on was not without worry and trepidation especially having to read the travel advice on the UK Government about westerners in Karachi. It highlights dangers such as kidnap, ransom and random terrorist cells. Yikes! Winter 2016 is not exactly a great time for anyone to travel to an Islamic country especially a lone western woman.

So how did the possibility of this trip even happen? It came about through my reason for living of course! My vocation, my passion: midwifery.

A young woman, Sofia, had reached out to me in need. She had researched and researched and come to the conclusion that a caesarean section she had 2 years ago, and at the young age of 19 (an age when healthy women usually have babies with ease in my experience) was unnecessary, and she did not want to put herself or her new expectant baby at risk again. Her research had led her around the world to me. A vaginal birth after caesarean section (VBAC) is rare in Pakistan and a home VBAC absolutely unheard of, and definitely unsupported by the medical profession.

I, on the other hand, like a challenge and adore supporting women who make informed choices. So, having no booked clients for the time in question, checked the legalities, obtained my visa and agreed to go and help Sofia achieve the birth she so desired.

“I was able to stretch out, sleep, watch movies and kid myself that the tummy rumbles were not little sparks of fear of the unknown.”

I now found myself alone and about to start a journey with no knowledge of how it would end. After spending a couple of hours in the lounge at Heathrow, eating and drinking my fill of the last western food I may have in I didn’t know how long, I walked to the gate just as the flight was boarding. Being last on I could see that the front cabin was empty, but as I approached my seat near the back I could see I was sitting between two men. Being a Middle eastern airline I played the ‘woman’ card and got away with it, so following take-off I was moved to the front cabin and into in a whole row of seats to myself. Result! I was able to stretch out, sleep, watch movies and kid myself that the tummy rumbles were not little sparks of fear of the unknown.After 7 hours we landed in Darfur. The airport was amazingly plush and western, but I only just had time to get to the gate where I boarded my second flight to my final destination; Karachi. Although only a three-hour flight, the passengers consisted of almost all men. Just 4 women on board including me, the only westerner abroad. It was from that point that a few sneaky feelings of unease entered my mind, and I wondered as I listened to the strange accents and language, and as different strange smells wafted around, if I had made the right decision in agreeing to come half way around the world to a 3rd world country, to stay with strangers and attend a birth, a VBAC even, in a place where I knew nothing of the medical system. Oh birth angels what am I doing? I thought.

“I didn’t know where to look next as the completely shocking sights kept my eyes glued to the roads.”

Karachi airport is primitive, dusty and old, but it was very early on a Sunday morning and quiet, so I had no problems getting through the legal requirements and finding my bags. As I finally exited the doors I scanned the crowds of dark faces and, as promised by Sofia during the arrangements stage of this adventure, found the large white frame of Muna, my new client’s mother, with frantic hands waving, waiting for me. The drive to Sofia’s house was a blur as I listened to Muna try to explain to me where we were and point out various land marks. I laughed out loud at the truck art, the wild and psychedelic decorations covering all the buses and large vehicles. I didn’t know where to look next as the completely shocking sights kept my eyes glued to the roads. I kept hoping the sights would get better, but when we turned into a wide dusty road the landscape changed to resemble at best a building site and at worst a bomb site. I now worried at what lay ahead. We finally pulled up at what looked like a nice house, as much as I could ascertain anyway, sat behind its seven foot walls, and I let out a sigh of relief to be entering this oasis of niceness in a desert of grey.

Sofia was waiting on the door step and was delighted to see me. The house was big and airy with huge ceiling fans and air conditioning. Although onlyearly inthe morning the sun in the winter blue sky was already hot. Sofia had made “my” room nice and welcoming with a jug of fresh water and a tin of Godiva biscuits next to my big comfy bed. I had my own bathroom in which she had put all new toiletries for me. The house had lots of strange unfamiliar smells going on that I would have to very quickly either ignore or get used to, however the internet was good which was to me the main thing for it meant I could keep in touch with home and social media and not feel cut off or isolated. What did we used to do without the internet? After unpacking and doing a bit of getting acquainted and chatting about the journey Sofia suggested a walk around outside.

“I began to feel a bit excited and was looking forward to learning more about this strange and different culture.”

We walked around the local roads of the housing development, which was mostly a building site, while Sofia explained that this was a safe area to stroll. It passed through my mind that, if this was a safe area, why we were accompanied by an armed guard? I couldn’t help but to keep looking over my shoulder waiting for a car to draw up and bundle me into it in preparation for asking the UK Government or my family for huge amounts of money to let me go. Would they pay it?

When we returned to the house we had a lovely breakfast cooked by the servants and served to us on trays. There were so many servants, cooks, drivers, guards. I lost count of them but they are treated really well and are really willing to please. They are all from the really poor part of society so they work for next to nothing or food, lodging and education for example. I began to feel a bit excited and was looking forward to learning more about this strange and different culture. It seemed it was only minutes after breakfast that we went to Muna’s house for a lovely lunch. Her house was a was a short drive away, and just next door there was a huge swarm of massive birds that looked like eagles (called little eagles) and Sofia took me onto the roof to take pictures of them as they swooped and flew all around our heads. 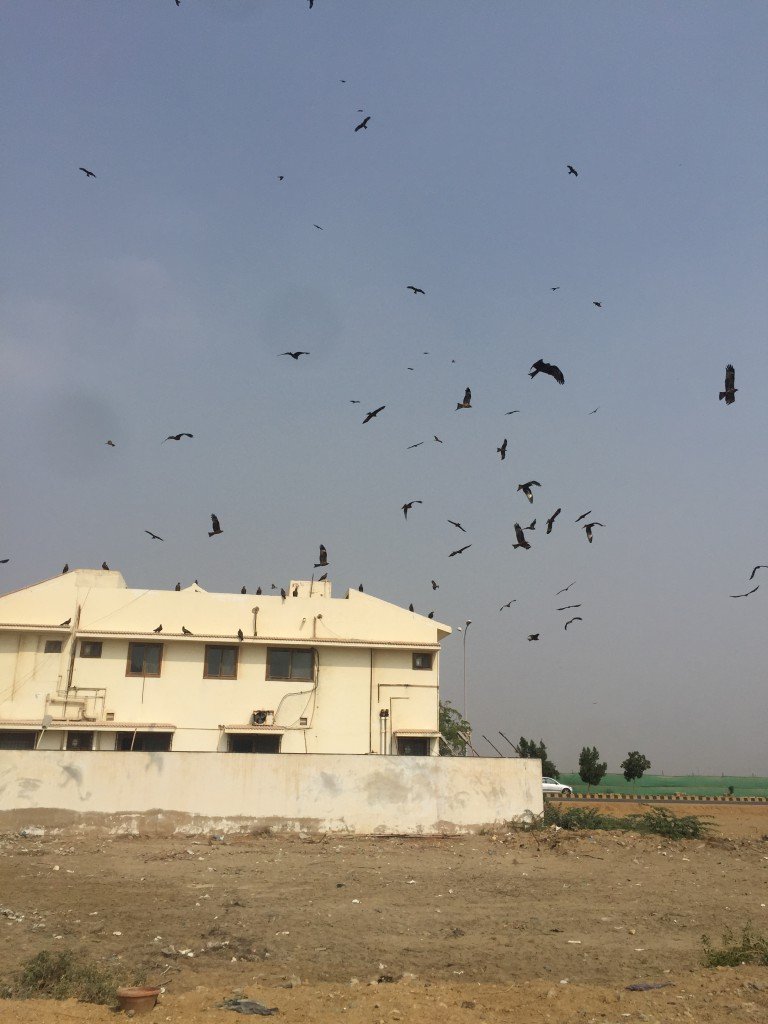 Following lunch we went for a ride in the family’s little Rickshaw. The family driver, Sharif, who has been with the family for 15 years apparently, was delighted to be asked to go out as he loves driving it. No one was more delighted (other than me) to be experiencing this new type of vehicle than Ebo, Sofia’s little 2-year-old boy, and he whooped with delight as we pootled along in the soft warm breeze. I can’t say I was impressed with the dry dusty litteredscattered landscape scenery but it sure was different… On our drive we saw a public bus like no other I had seen before. 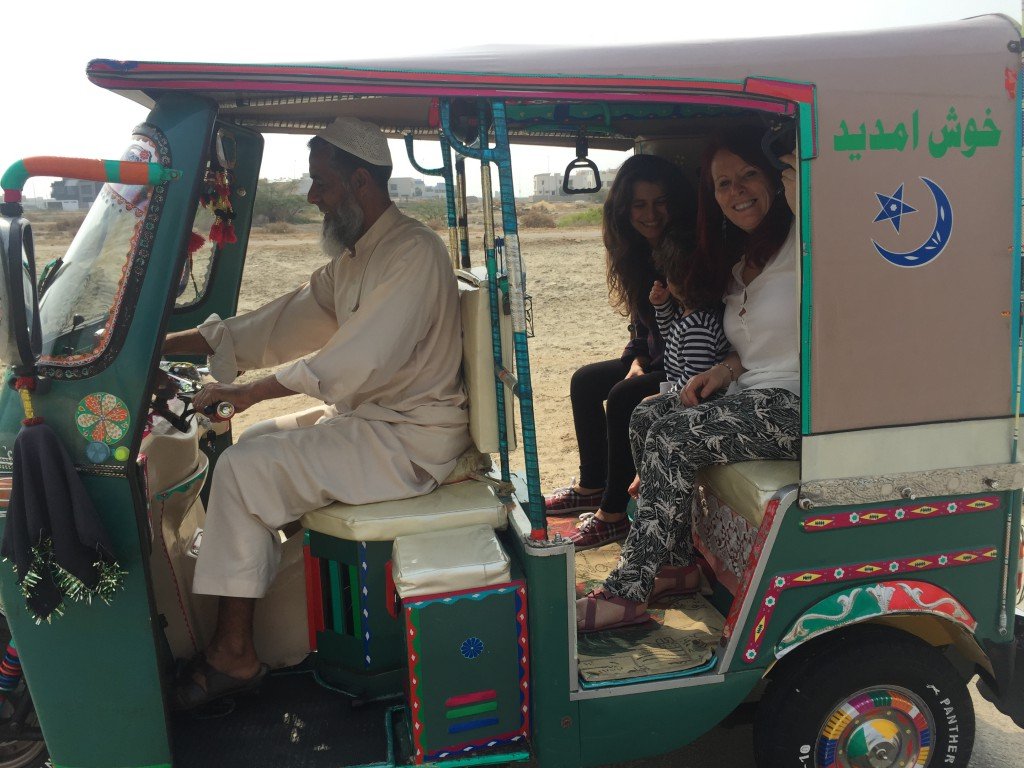 I was amazed at it and its crazy truck art.It was so colourful with bright coloured decor inside and out. We stopped and took pictures and the bus driver invited me to look inside and then pose in the driver’s seat. All the time under the watchful eye of Sharif the trusted driver!

Back at the house the lunch was to die for. Muna is an amazing cook and had put many dishes on the table with foods I had not even heard of, let alone eaten. Of course I tried them all! We chatted all afternoon about all things births, but also about the country and its problems and culture. It appears that corruption, suppression and no accountability are the worst problems and difficulties. Yes, it’s been a lovely day but right now I am feeling that I would not want to stay here any longer than need be. Maybe that will change in time but I feel a long way from home. Once in bed I was ready to watch Game of Thrones on my lap top then sleep. It is Sunday evening and I haven’t been to bed since I got up to begin my adventure from home on Saturday morning.

DAY 1 – Touchdown in Karachi  It is not one but two flights I was about to embark on, and although I usually love travelling, on this occasion I wasn’t looking forward to the long journey ahead. The journey and adventure I was about to go on was not without worry and trepidation especially having […]

Independent Midwifery and Homebirth – A Father’s Point of View

A Worldwide Journey for Mother and Midwife – Day 14

A Worldwide Journey for Mother and Midwife – Day 13

Our History
Board Members
Partners and Sponsors
Helpful Links